Sustainability is a priority here at the beach. We are continually pushing the boundaries in an attempt to neutralise our impact on the environment and, wherever possible, to have a positive effect on our surroundings.

One example is our policy on sourcing fish. We have done our best to research the most sustainable options available, and have built our menu around seasonality, life cycles and an evolving understanding of local fish stocks. 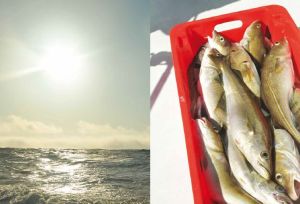 One company we are lucky enough to work with is Wild Harbour. Based in Hayle just across St Ives Bay, Wild Harbour supply 100% sustainable fish from their own boat and other small Cornish fishing vessels. Each fish is traceable back to the fisherman who caught it, as Wild Harbour is part of the Southwest Handline Fishermen’s Association which operates a tagging scheme. The company is also commited to paying fishermen a fair price for their efforts.

Wild Harbour was the brain-child of Saul and Abi Astrinsky, who explained their relationship with Porthminster:

“The Porthminster Beach Cafe has been part of the journey for Wild Harbour right from the beginning – from before we existed actually!  When Saul was fishing full time he used to drop Mick some Sea Bass from time to time and it was the enthusiasm of Mick and his team for the quality, freshness and most of all our sustainable roots, that made us think that perhaps Wild Harbour could become a reality.”

It’s fantastic to work with a local business who share our ethos so perfectly. Abi from Wild Harbour explained further:

“We believe that the sustainability and traceability of our fish is of the utmost importance.  We only supply wild, sustainably caught fish from the local inshore fleet and every individual fish or shellfish is traceable back to the fisherman who caught it.  We also believe that our handpicked, in shore fishermen are special! They keep their fish to such a high standard, that we choose to set a fair price for their fish and keep this throughout the year.”

Respecting the breeding seasons of certain species and relying on less intensive fishing methods means that our menu has to be adaptable to change. Daily specials allow us to make the most of a fresh haul, whilst we take species off the menu if stocks are low and therefore in danger of not being properly replenished. 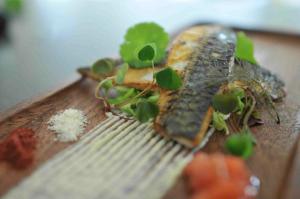 Our Sea Bass, Mackerel, Pollock and several other species are supplied by Wild Harbour. We hope that by supporting the sustainable fishing industry, Cornwall’s fish stocks can be managed responsibly to meet the needs of locals and visitors, at home and in restaurants, to enjoy in years to come.

On Monday 2nd December, a ‘culinary collective’ of the South West’s top chefs gathered at Watergate Bay for the launch of photographer David Griffen’s The New West Country Cook Book.

The book aims “to showcase the region’s culinary talent and high quality produce through beautiful photography and home-cooked recipes.”

David has been documenting the burgeoning food scene in the South West for over 10 years, becoming an influential figure in the industry himself along the way. “Working with David is always exciting and reassuring in equal measure,” said Porthminster Executive Chef Michael Smith. “He is knowledgeable and passionate about food. David’s work shows off each chef’s creativity and individuality, which is what makes this collection of images and recipes so exciting.”

David explained how he first dreamed up the idea of bringing the culinary talent of the South West together. “The idea for the book came from watching the chefs working together at festivals and demonstrations; in quiet moments backstage they were talking as a group and to each other and sharing ideas and experiences – there was a real sense of mutual support.”

Focusing on key ingredients that can be found or foraged locally, the recipes emphasise the flavours of food in a uniquely West Country style, all of which is captured through stunning photography. 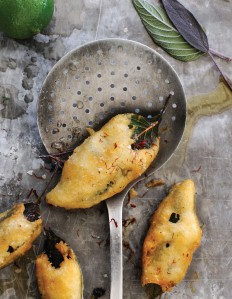 Nathan Outlaw, who has won two Michelin stars for his restaurant in Rock, Cornwall, said: “Over the last ten years the camaraderie amongst the chefs of the South West has increased. I enjoy being in the kitchen and cooking with other chefs, and I think it is good for the chefs who work with me to see other styles. It’s great to have these extra influences in the kitchen.”

David added: “The brief given to each chef was the same – no fancy techniques, just honest home cooking, with a focus on the region’s produce.”

Tom Kerridge, who grew up in Gloustershire and runs the two Michelin starred Hand Flowers in Marlow said: “The standard of cooking in the South West over the last few years has risen dramatically, with the increase of a number of home grown South Western chefs opening their own places or becoming head chefs in their own right in some fantastic venues.”

The New West Country Cookbook is now available to buy at Porthminster Beach Cafe, alongside our very own cookbook.